Thanks to the cold and dreary weather here in Ohio, I've had to lay off of the clear coating for the last couple of weeks. I have still been able to apply shellac to the Red Special body and neck. Largely because I have either been brushing it on the body or French polishing the fret-board. I have had to refrain from spraying the Strat and Tele bodies, since the smell is just too strong for indoors.

Instead, I've turned my attention to constructing the necks for the next few builds that I am planning for 2012. The photo above is of a bloodwood blank that I cut today. The photo does not do the figuring on this piece of wood justice. This will be my first attempt at a one-piece neck. It is about 1 1/8 inch thick - which will be perfect this project. I've cut out the basic shape and will route the truss rod channel soon. (I know, I probably should have routed the truss rod channel first - a mistake on my part? Perhaps, it certainly would have been easier that way.)

I also had enough Bloodwood left over that I should be able to use it ti make an interesting pick guard.

For those not familiar with the one piece necks, the fret-board and the neck are just that - one piece. While the truss rod channel is routed through the back of the neck and plugged with a contrasting wood. In this case I will probably opt for maple. This plug is often referred to as a skunk stripe. You can see this on the back of many Fender maple necks.

By the way, the Purple Heart that the neck blank is laying on will be two more necks. One of them will eventually end up on the Firebird project that I have been neglecting these last few months - my third attempt.
Posted by tehcnalp at 9:50 PM No comments: 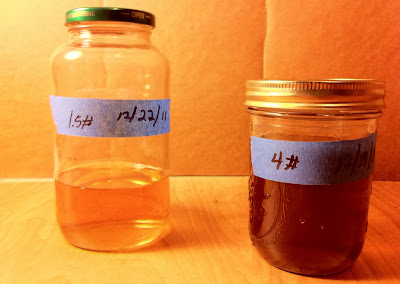 When I started this blog I promised to document my success as well as my mistakes. Well, here's a pretty big mistake on my part - measuring shellac flakes. The first few times that I mixed up shellac I planned on mixing a 1 or 2 pound cut. I measured out my out my alcohol, 8oz., and then I measured my shellac flakes, 1oz. for a 1 pound cut or 2oz for a two pound cut. Then I mixed it in a mason jar.

Here's the obvious thing that is not printed on the instructions label - you are suppose to measure the shellac flakes by weight... I measured it by volume, using the same little measuring cup that I used for the alcohol. So that 2 pound cut was in actuality about a 3/4 pound cut.

In the above photo on the left is what I though was a 4 pound cut of shellac that I mixed up last week, making it the same way that I had the previous few times. On the right is an actual 4 pound mixture that I did this week the proper way using a scale to measure the weight of the flakes. Notice the difference?

All is not lost though, the mixture on the left is about a 1.5 pound cut and I'll be able to use it.

On a side note, when I mixed the 4 pound cut (4oz. of shellac flakes and 8oz. of alcohol) the shellac and the alcohol looked like they were almost equal in volume. I had my doubts about whether I had mixed it properly. I really didn't think the shellac was going to dissolve. I shook the jar, placed it in warm water and then placed it under a lamp. After about 30 minutes about half of the shellac had dissolved. A few hours later there was still a large amount of shellac at the bottom of the jar. But by the next morning it had completely dissolved.
Posted by tehcnalp at 9:35 PM No comments: