So far I have about 28 hours into this build. The back of the neck has been shaped, peg holes drilled and the neck glued to the body. I used the tape to mask off the edges in order to make it easier to cleanup glue drips. In the background of the bottom two photos is the Curly Walnut top that I will eventually glue to the body.

I'm also continuing to add Tru-Oil coats to the Lap Steel. This weekend I plan to begin wet-sanding and polishing.
Posted by David at 8:14 PM No comments:

In about a week this Ash Tele that I started working on a long time ago, will finally come up from the basement. I'll finish up the electronics some time this week.


The 8-string lap steel will be the next one up from the basement. after a few final coats of Tru-Oil, I'll begin the wet sanding and polishing. Then it's just a matter of fitting the hardware and the electronics. Shouldn't be more than a couple weeks.

We brought the Red Special with us on our Thanksgiving trip. While we were in New Orleans, we met up with my former guitar teacher, Austin Scicard. Here are a couple videos of him playing the guitar.


Austin was one of the reasons I chose to build a Red Special. I remembered him being a Brian May fan and owning one of the Guild Red Specials. This was why I wanted to get his opinion on this build. As a show of gratitude for Austin's lessons (particularly the lessons in improvisation) and his friendship, I gave him the guitar.

Some more progress on the Junior. I'm about 20 hours in on this project.


This weekend I picked up a new router bit. It's a 1 1/4 inch spiral downcut bit with a guide. This is replacing the my straight cut 1 1/2 inch bit. The cut went quickly, took about 5 minutes to shape the top to match the body. I tried a climb cut with a position pin. This time I had absolutely no tear out. 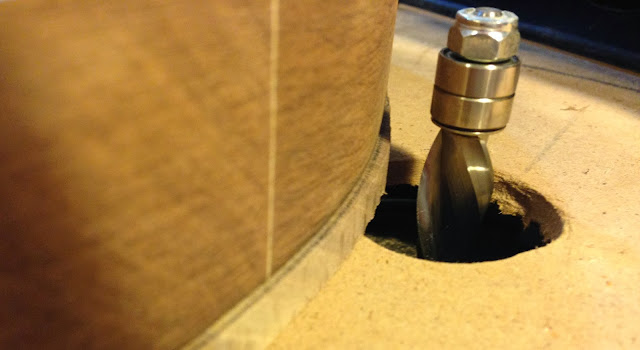 The next challenge was to cut a squared opening for the fretboard extension for the 24th fret. 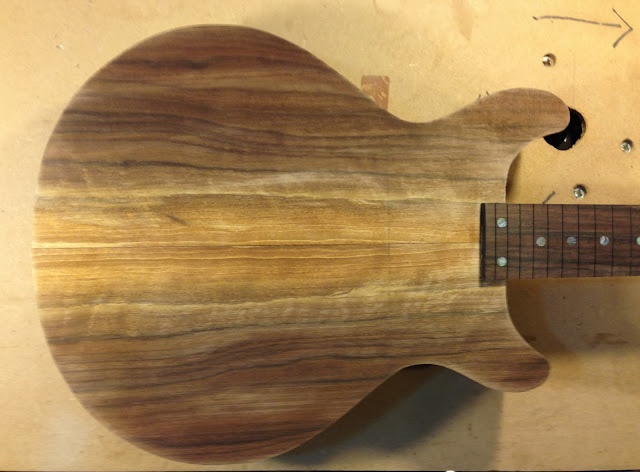 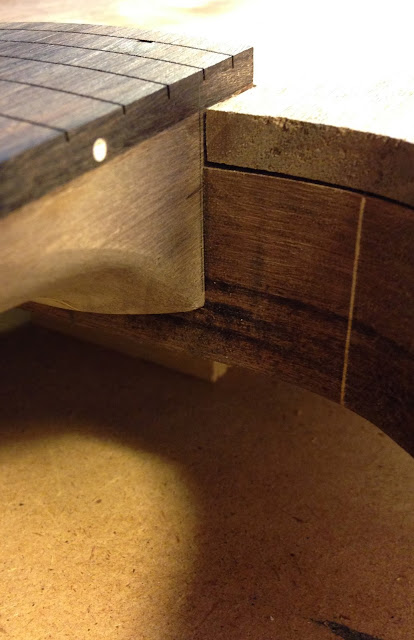 Last week, I shaped the headstock and sanded it flat.

I also shaped the the contour on of back of the neck. 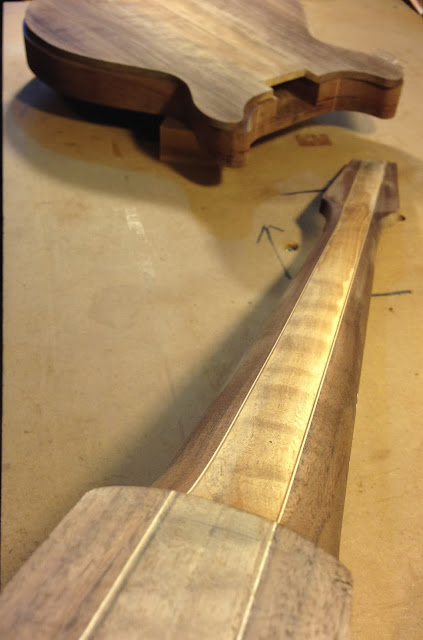 I'm getting to the final steps on the lap steel. Last Sunday, I set the bridge in place, drilled holes for the screws, and lined up the first an last strings.

After Sanding through to 320 grit, I was able to start on the finish. I will slowly rub several coats of Tru-Oil everyday for about a week to 10 days.

So, a few weeks ago I began working on a walnut double cutaway guitar with a set neck.


I cut the base of the neck to a 4° angle instead of routing the angle in the neck pocket.


The neck is made from three strips of curly walnut with maple and walnut veneer between the strips. The center strip is a lighter piece of walnut.

The neck was cut from the same plank of walnut that was book-matched for the top of the body. 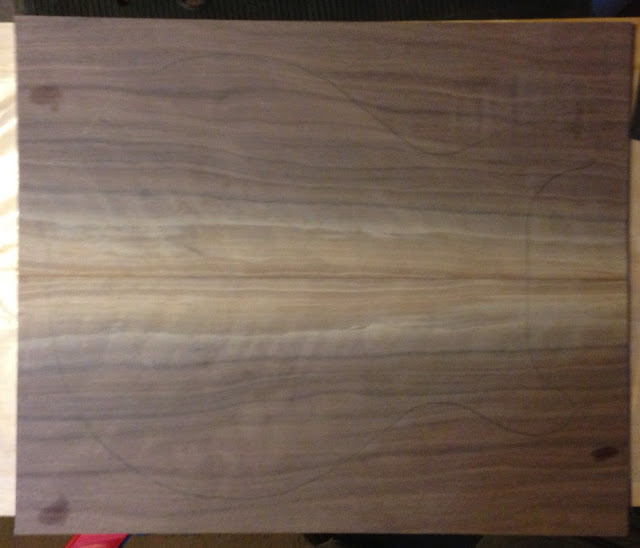 The body is a three piece walnut with walnut veneer sandwiched between each piece. This weekend I sanded the body flat and sanded a 12 inch radius on the fretboard with 80 grit. Next, I will drill the holed for the side dots. Then I will carve the the back of the neck.

In the past couple of weeks I've made some major progress on the lap Steel.
First, I routed out the interior of the headstock. I decided to go in this direction as the strings were rubbing against the side of the wood.


This weekend I began the final sanding. The body has now been sanded from 80 grit through 320 grit. Next weekend, I will sand one more time with 320 grit. And then I will glue the fret board in place.

Around 1987, I fell in love with the Steinberger P series guitar. So naturally this would be a perfect candidate for building a copy. I started this build in early 2012. Hopefully, I'll finish this one up in few months. I've routed the body for two Humbuckers. I've also routed an inset for the bridge. Steinberger's bridge is inset about 10 mm. The JCustom Bridge that I'm using is not as thick. As a result I only had to route about 1.5 mm. 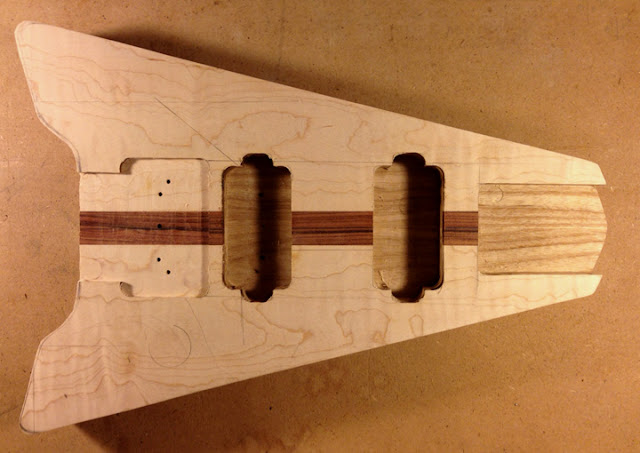 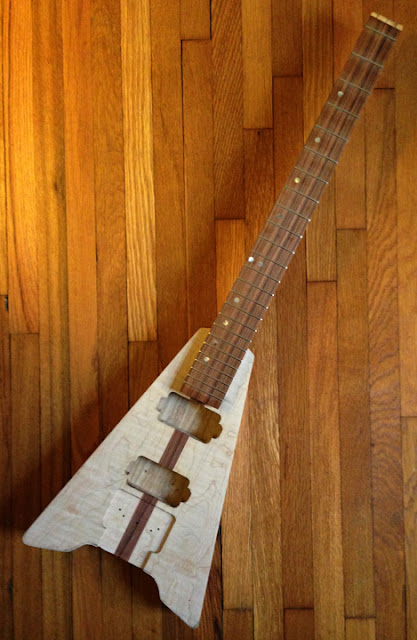 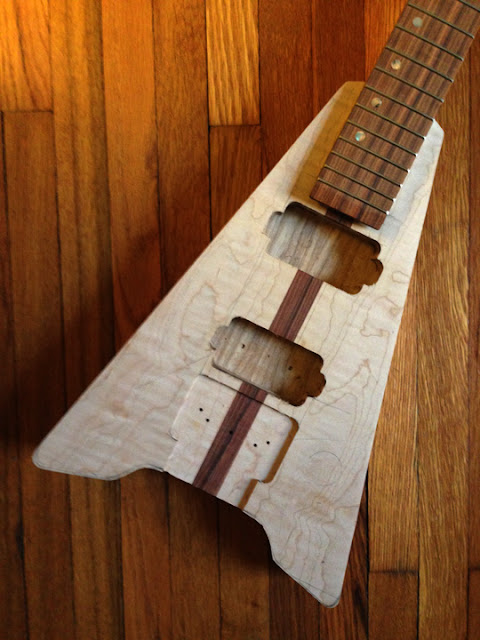 Next up, I'll just need to route the rear access panel and an output jack. Then it's on to final shaping and sanding.
Posted by David at 10:52 PM 1 comment:

Last Summer, I started building an eight-string Lap Steel guitar for a friend of mine. I started with an 8 inch slab of Maple and a Birdseye Maple fretboard.

I then printed a template for a 23 inch scale. I used a carpenter's scale to cut straight lines. The cuts were filled with tinted black epoxy. 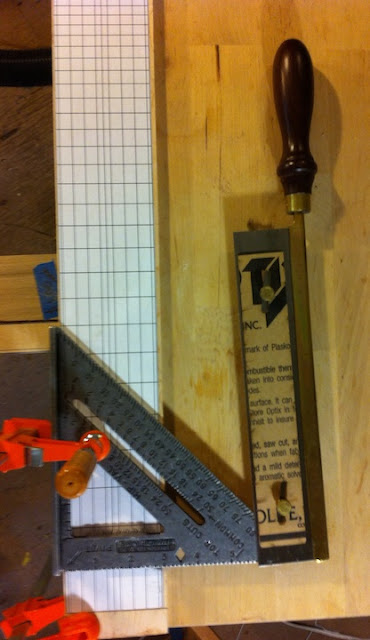 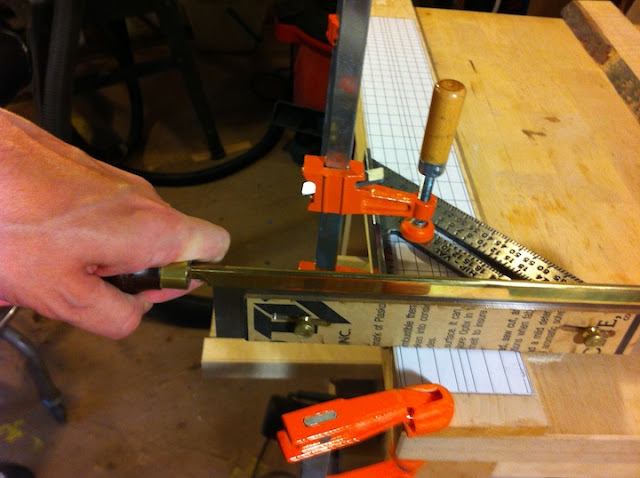 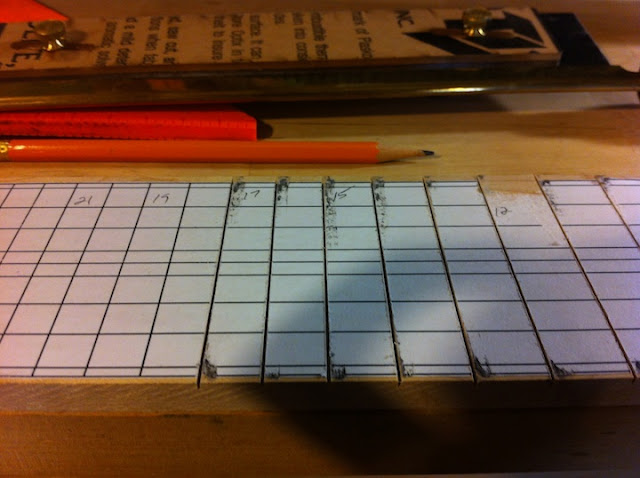 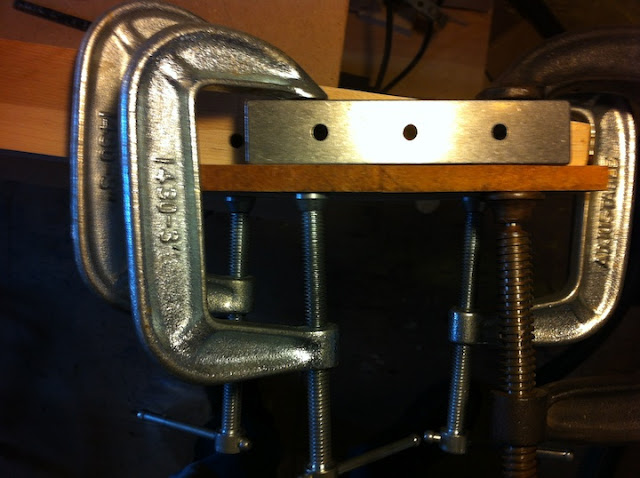 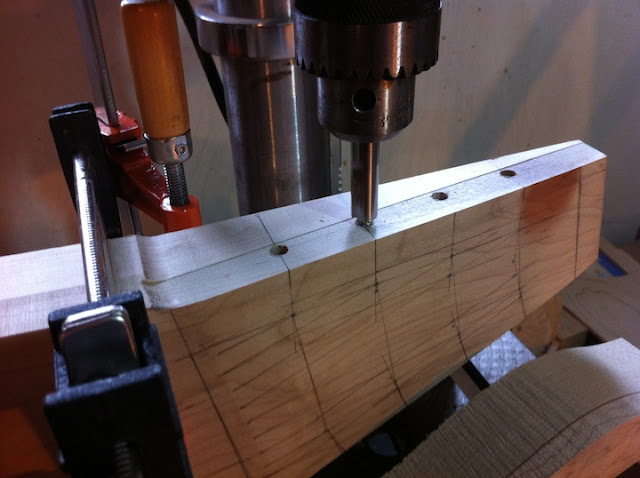 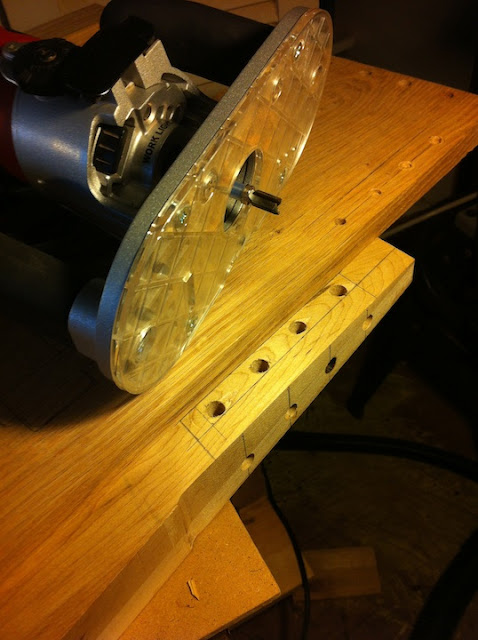 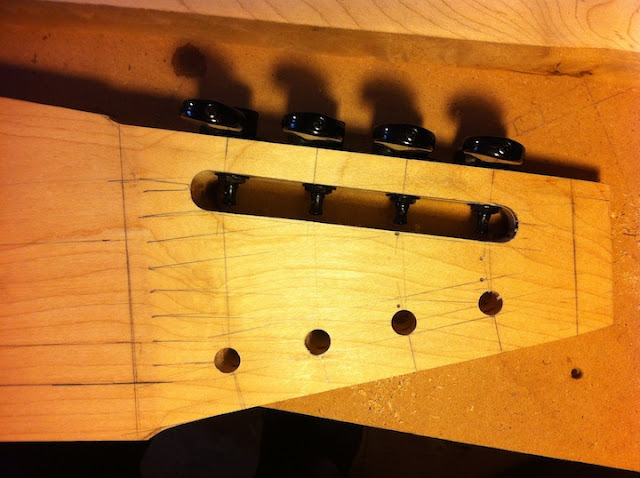 I then strung up the guitar to line up the positioning of the nut, bridge, fretboard and pickup. 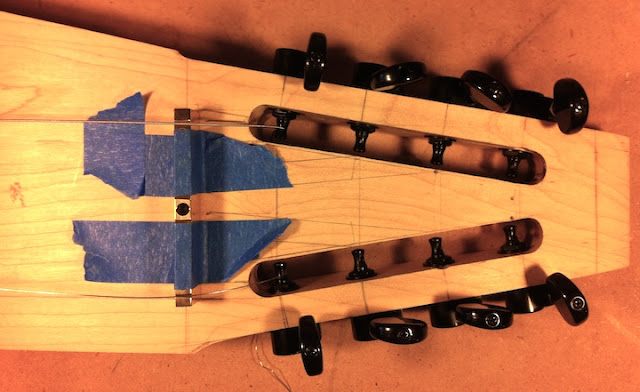 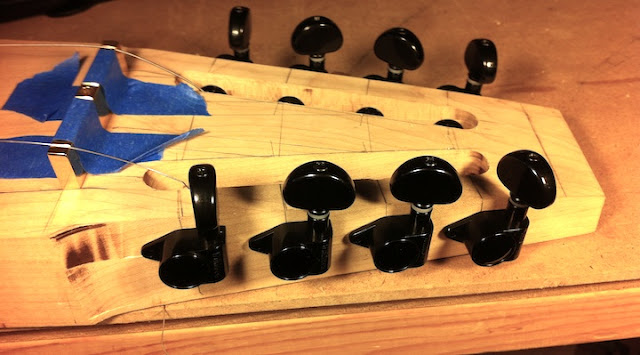 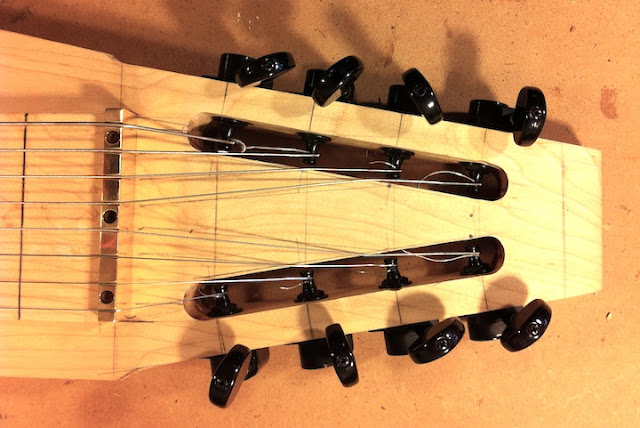 I then drilled holes for the fret markers and glued a black binding to the fretboard. 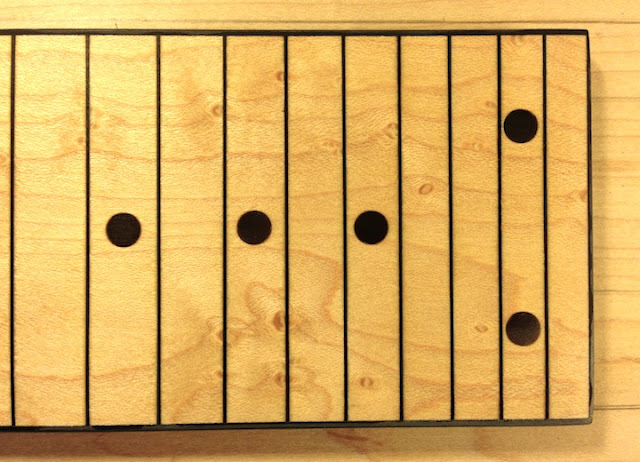 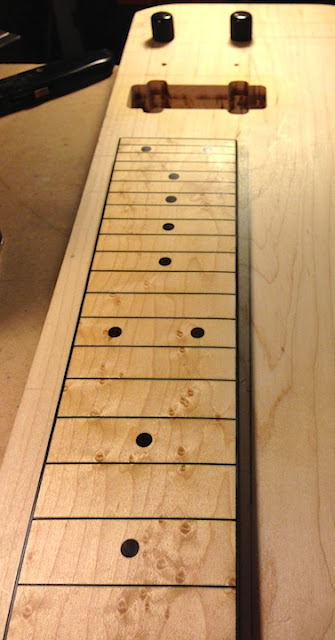 There a couple steps not documented here. I had to create a template for the pickup route. And then I had to route the rear control panel and the output jack.

Next up I will clean up the sides, round the edges and do a final sand of the body before I move on to applying a Tru-Oil finish. Hopefully I'll have this finished before the end of the Summer.
Posted by David at 9:53 PM No comments:

In the mid 80's my guitar teacher in New Orleans, Austin Sicard played copy of Brian May's Red Special. I always liked that guitar. So, naturally when I started building guitars, the Red Special was on my short list of guitars to build. Here is my take on this classic. Instead of using 18th century Oak and Mahogany, I opted for Maple and Padouk. Yes, I picked the Padouk because of its natural red color. The Fretboard is a 25 inch scale instead of the 24 inch scale of the original. I also chose a Bigsby-type vibrato instead trying to replicate May's tremolo. To compensate for the brighter tone of the Maple and Padouk, I used 250k pots and a .047 uF capacitor. 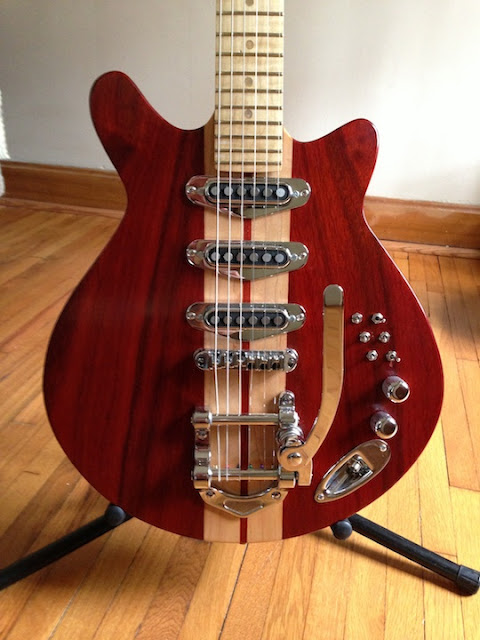 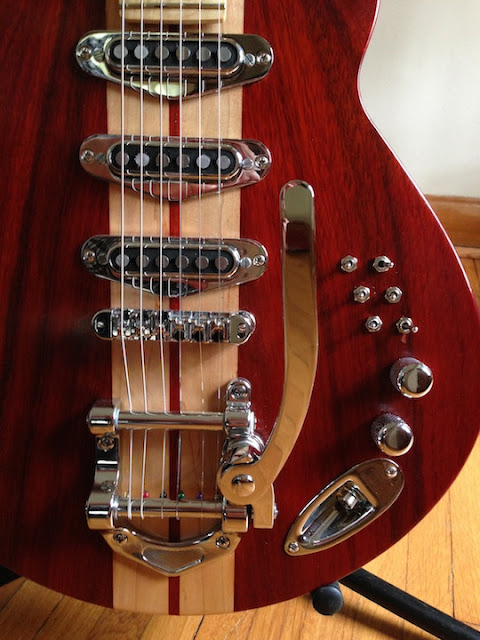 This build was really more of a study in wood, electronics, sound quality and shape. The guitar has a bright crisp ring when plugged in. The phase shifting switches help create a variety of sounds, from a thin single coil reminiscent of a Strat or Tele to a thick warm Humbucker. I'm not too pleased with the Bigsby-type vibrato. I may replace it with a real Bigsby at some point in the future. I remember this the next time I see a good price on an ebay knock off.

As far as the shape is concerned, this is a stand up and play type of guitar. The bottom curve doesn't lend itself to sitting down and playing. I find myself having to use more of a classical sitting position with the guitar on my left thigh rather than my right. The neck is thinner than the one I built for last year's Tele. It feels faster.

Overall, I love the look, sound and feel of this guitar. And I've learned a great deal from this build. I've complained about Padouk before. And it will affect whether I choose to use it in the future. I discovered that the sawdust from Padouk causes sinus problems for me. In addition, pairing Padouk with Maple may not be a best choice. Padouk also has a tendency to bleed when applying shellac. But all of this aside, I love the look. Nothing like a naturally red wood. 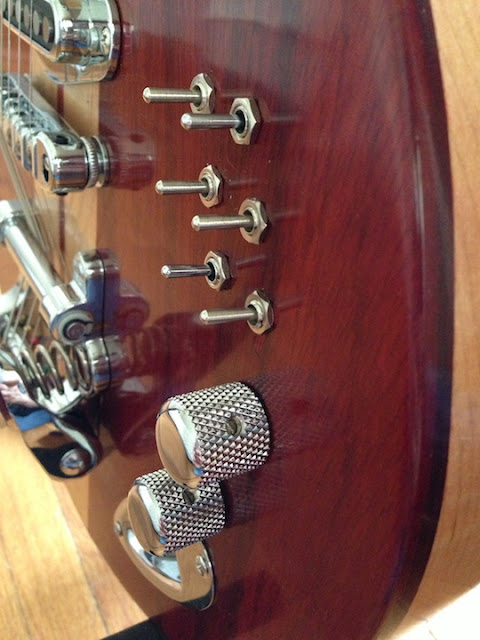 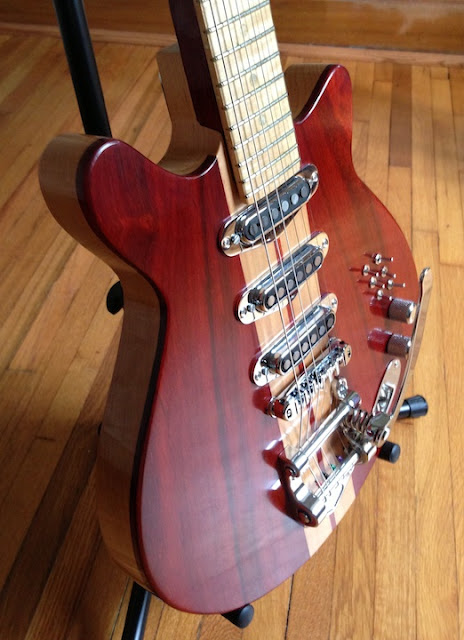 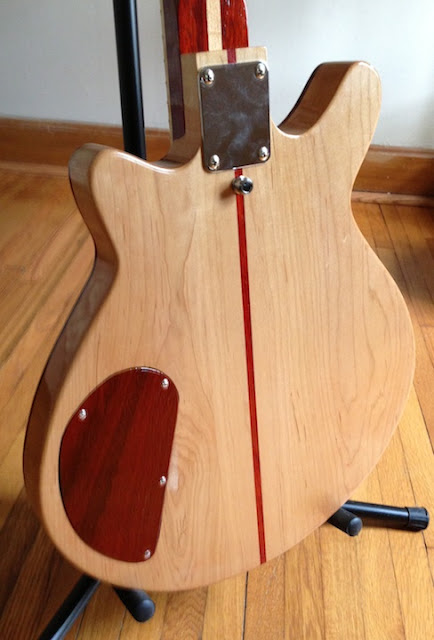 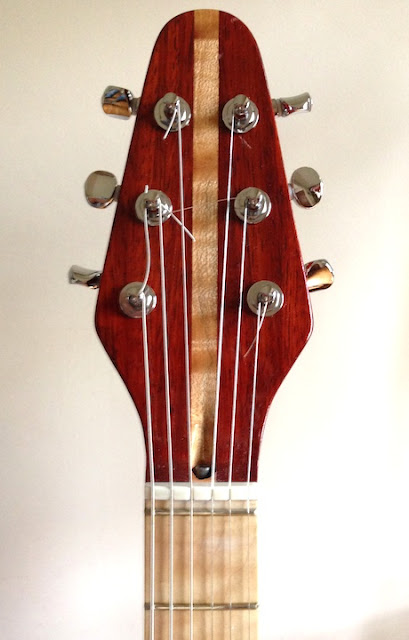 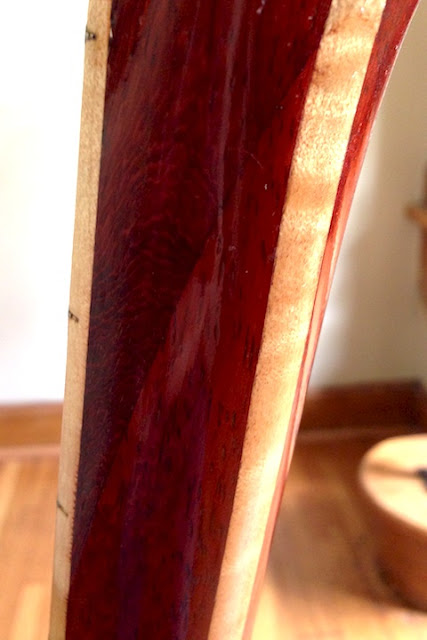 Would I build another Red Special? And if so, would I do anything differently? Yes, and Yes.

First, I'd use a Mahogany back, with a book-matched Padouk top (yeah, I know. Did I mention how much I love the look of this guitar.) I'd use a three piece Padouk neck with a Padouk fretboard. The neck would be set and glued instead of a bolt on.

Next, I'd like to try three on/off/on DPDT instead of the six switches. This way I could save some real estate while combining the functionality of two separate phase shifting and on/off switches for each pickup. I'd also consider using a concentric double pot instead of two pots - again real estate.

And finally, I'd spring the extra money for the copy of May's tremolo.
Posted by David at 8:31 PM 1 comment:

So, it's been almost a year since my last blog posting. I have been working (very slowly) on a few different projects. There have been set backs and mistakes. Mostly problems with finishes.

But I am finally putting the finishing touches on the Red Special. The body has been assembled.

The wiring is a little complicated. The Red Special has three On/Off switches and three phase reversal switches. I used six On/On DPDT switches. After doing a little online research, I've begun to wonder if this could have been accomplished with three On/Off/On DPDT switches instead. At some point in the future I may give it a try.

Instead of working inside the guitar, I used a piece of card board to work on. This way I was able to avoid damaging the back of the body. This also gave me better access to the small terminals on the DPDT switches. 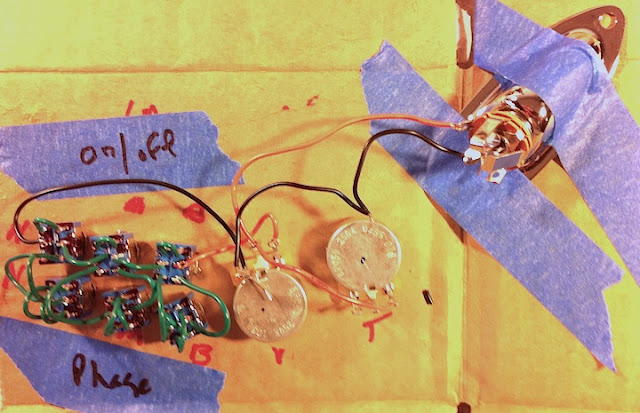 After placing the wiring in the Red Special, and plugging it in, I discovered that I had two bad switches - the phase switch for the neck pickup and the on off for the bridge pickup. Unfortunately, no one local carries these particular DPDT switches. So now I just have to wait until next week for an internet order comes in.
Posted by David at 9:42 PM No comments: